The Nephilim were an antediluvian race of people which are referred to in the Bible as "giants" and, according to popular belief, lived prior to the Great Flood of Noah.

The Nephilim Etymology
(From Wikipedia. com)

The Brown-Driver-Briggs Lexicon gives the meaning of Nephilim as "giants." Many suggested interpretations are based on the assumption that the word is a derivative of Hebrew verbal root n-ph-l "fall." Robert Baker Girdlestone argued the word comes from the Hiphil causative stem, implying that the Nephilim are to be perceived as "those that cause others to fall down." Adam Clarke took it as passive, "fallen," "apostates." Ronald Hendel states that it is a passive form "ones who have fallen," equivalent grammatically to paqid "one who is appointed" (i.e. overseer), asir, "one who is bound," (i.e. prisoner) etc. According to the Brown-Driver-Briggs Lexicon, the basic etymology of the word Nephilim is "dub[ious]," and various suggested interpretations are "all very precarious."

The majority of ancient biblical versions, including the Septuagint, Theodotion, Latin Vulgate, Samaritan Targum, Targum Onkelos and Targum Neofiti, interpret the word to mean "giants." Symmachus translates it as "the violent ones" and Aquila's translation has been interpreted to mean either "the fallen ones" or "the ones falling [upon their enemies]."

Who Were The Biblical Giants?

The Nephilim were scarcely mentioned in the Hebrew Bible and not precisely defined by those who originally translated the ancient writings from Hebrew to Greek. Only two scriptures can be found in the Torah/Pentateuch that is associated with these "giants". 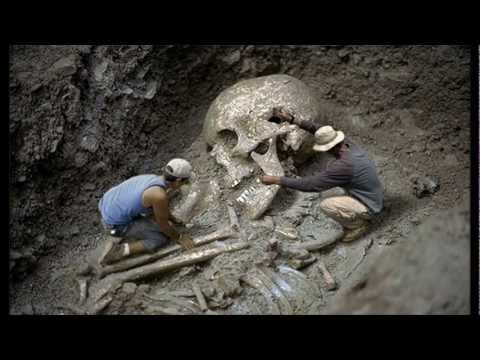 "There were giants in the earth in those days; and also after that, when the sons of God came in unto the daughters of men, and they bare children to them, the same became mighty men which were of old, men of renown." Genesis 6:4

"And there we saw the giants, the sons of Anak, which come of the giants: and we were in our own sight as grasshoppers, and so we were in their sight." Numbers 13:33

According to popular legend, the Jews of Alexandria in the Diaspora translated the Torah (where both above verses are found) during the reign of Ptolemy II in Egypt. This became known as the Septuagint and was originally translated by 72 Jewish scribes more than 2,200 years ago. However, these Jewish scholars were quite 'hush, hush' on the subject of who these giants actually were.


There are commonly two views regarding the identity of the Nephilim, which are sometimes in controversy among the biblical scholars, but the most generally accepted interpretations are:

1. The Offspring of Angels - Many early sources refer to the "sons of God" as "angels" (in some cases, "fallen angels"). The earliest reference is indicated in the Dead Sea Scrolls, the Greek and Aramaic Enochic literature, the Jubilees and in certain texts of 1 Enoch (aka: Ge'ez manuscripts). The earliest statement in a secondary commentary unambiguously interpreting this to mean that angelic or heavenly beings mated with humans, can be traced to the rabbinical Targum Pseudo-Jonathon, and it has since become especially commonplace in present-day Christian commentaries.

2. The Offspring of Seth - The Dead Sea Scroll fragment (4Q417) contains the earliest known reference to the phrase "children of Seth", stating that God has condemned them for their rebellion of mating with the women of Cain. Other early references to the offspring of Seth rebelling from God and mingling with the daughters of Cain, are found in Rabbi Shimon bar Yochai, Augustine of Hippo, Julius Africanus, and the Letters attributed to St. Clement. It is also the view expressed in the modern canonical Amharic Ethiopian Orthodox Bible.

There is also a third view to this Nephilim scenario, although not as common, which the prophet Ezekiel referred to the Philistine warriors as "the fallen mighty of the uncircumcised"

"And they shall not lie with the mighty that are fallen of the uncircumcised, which are gone down to hell with their weapons of war: and they have laid their swords under their heads, but their iniquities shall be upon their bones, though they were the terror of the mighty in the land of the living." Ezekiel 32:27

However, this view is not commonly agreed upon as Ezekiel lived after the Great Flood of Noah; the same can also be said of Goliath the Giant prior to the reign of King David. Such controversy has been expressed for many centuries now. 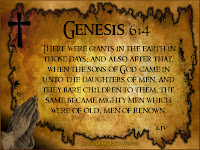 Some scholars of religious studies believe that Genesis 6:4 referred to the "sons of God" as men from godly families of the righteous descending from Seth to Noah. The "daughters of men" were the women from the lineage of Cain. Their iniquity was breaking away from their covenant with God and marrying into the wicked families that were descended from Cain. The results from this antediluvian union was God sending forth a flood [for the sins of mankind] to destroy the wickedness they had created.

Other scholars speculate and sometimes even reject the theory that the "sons of God" to be fallen angels. Such controversy brings to mind that sexual liaisons with human women would be impossible and not a result of creating a superhuman mongrel race. Even when the Nephilim is again mentioned in Numbers [after the Great Flood], the modern scribes cannot agree upon where this "giant" race of people originated from.

Descendants of the Nephilim -

According to the Book of Numbers, the Anakites inhabited Hebron in the land of Canaan and were purported to be a tribe of "giants". Anak, the forefather of this ancient tribe of "giants", is first mentioned in Numbers 13:22 and can be compared with the Sumerian god, Enki. Moses sent out 12 spies to scout out the land where these post-flood Nephilim resided; upon reporting to the leader of Israelites that men were extremely tall and mighty, the majority of spies were hesitant to proceed. However, Moses gave the order for war and during the conquest of Canaan [found in the Book of Joshua], Joshua and Caleb (the only spies who had enough faith to proceed) eradicated the tribe of Anakites. The Anakites are briefly mentioned in the books of Deuteronomy, Joshua, and Judges.

Another tribe of the Nephilim, who were the descendants of Anak's sons, were the Philistines. This tribe of "giants" lived during the time of King David. The popular story of David and Goliath revolves around this giant race of humans. It is commonly known that a young David slayed the giant, Goliath, before he became king of the Jews. By the 7th century BC, the Philistines lose most of their distinctive culture and are absorbed into the communities of other people in surrounding areas. It is unknown exactly what happened to the Philistines after that. 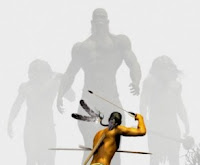 Taking into account the relationship between the Anakites and the Philistines, many similarities can be found in Greek mythology. Anax was the ruler of the Anactorians, a race of "giants". This giant king was the offspring of Uranus and Gaea, and the father of Asterius. The legend of Miletus (which for two generations was called Anactoria), described Anax as king of Anactoria, but during the reign of his son, the town and territory were conquered by the Cretan Miletus, who changed the name Anactoria to Miletus. It is not completely clear what happened to the Anactorians, but they were still existing when Constantine the Great expanded Byzantium and renamed it Constantinople.

With so many interpretations, it would explain the controversy that surrounds the theory of "biblical giants", but the majority of mankind does believe that the Nephilim once existed.

The Various Identities of Jesus Christ

The three major religions (Christianity, Islam, Judaism) are considered inextricably linked to one another through their histories because of certain common factors in their monotheistic theologies. And, all three faith-based institutions feature many of the same figures and places, yet they are often presented in different meanings and perspectives.

The same can be said of Jesus Christ of Nazareth, the Jewish prophet of Christianity. Although the three major religions of the world are intertwined and defined by common beliefs, they differ when it comes to doctrine and practice. Even their sacred holy books are reflected by such differences.

The Purpose of Jesus Coming:

Christianity - Jesus will come to rescue Israel, defeat the Anti-Christ, judge the nations and the wicked in Israel, and rule over a messianic kingdom.

Islam - Jesus (Isa) will return to overthrow al-Daijal in the battle of Aqabat Afiq in Syna to confirm Islam as the only true religion.

Judaism - The Messiah will defeat the gentile nations and restore the kingdom of Israel. Isaiah will be fulfilled and God will be recognized as the universal king.

Will Judgment Be Announced with the Trumpet of the Archangel?

Christianity - Yes. (Matthew 24:31) "And he will send his angels with a loud trumpet call, and they will gather his elect from the four winds, from one end of the heavens to the other."

Judaism - Yes. Shofar will announce the beginning of the messianic era, gather the scattered exiles, and serve as a summons to the heavenly court on the Day of Judgment.

Signs of the Times:

Result of an End Time Battle:

Christianity - After Armageddon, Satan is bound in Hell and believers enter the Messianic Millennium. Following the thousand year reign of Jesus Christ, there is a final battle with Satan.

Islam - A "Great Destruction" which destroys all but God, then a resurrection and recreation will occur.

Judaism - The war of Gog and Magog, in which God defeats the Gentile and establishes Israel in its kingdom over all the earth.

For Christians, Jesus is the Savior the planet is waiting upon to bring about a peaceful one world nation in which Jesus himself will rule over not only the planet Earth, but the entire universe. He will be instrumental is defeating not only evil, but Satan as well.

For Muslims, Jesus will be instrumental in helping to defeat the al-Daijal (equivalent to the Christian Anti-Christ) and preparing the way for the Mahdi [the purest Muslim since the Prophet Mohammad]. The Mahdi, who will lead a “spiritual jihad” in converting the Western world to Islam, will eventually overthrow the Dajjal and become ruler of planet Earth according to Islamic law.

For Jews, they are still awaiting their Messiah, who will appear during the end of days. Their arch-enemy is known as Armilus (equivalent to the Christian Anti-Christ). Many of the Judaic faith will believe Jesus, the Christian's Savior, to be Armilus who will die in battle before the actual coming of their long-awaited Messiah.

Some philosophers of religion believe power given to this dominant world leader, known by many names, will arise because the Abrahamic religions have become impatient during their long appointed vigil of preparing for the coming messiah (Judaic religion) or the long awaited return of the Mahdi (Islamic religion) or the anticipated second coming of Jesus (Christian religion).

Regardless, of who Jesus Christ of Nazareth really was, it cannot be denied that He will play a very instrumental role during what the Christian's refer to as the "End Times", the Muslims call the "Last Days" and the Jews ascribe as the "End of Days".

There is only one question that remains in regards to this Blog Post: Who's ? Right

Other Articles of Interest